About a month ago the Four/Five pod went on a field trip to the Common Ground Fair (CGF).

And when we got there we went straight to the Sheep (And Goat) Dog race.  There were about five dogs and about three of the dogs were laying down, But somehow they listened to the owner. My opinion of how he was doing it was that he could talk to the dogs but that’s impossible!

I wish I wasn’t going to middle school because there might be Really rude Teachers and Teachers that will be nice but you never know.  When I go to middle school, we’ll be the youngest people at school and the older kids would probably bully us as some people do to the Kindergarteners,  but I was off track.

When we were there we saw a lot of people from school and that we knew but there we mostly people that we didn’t know and the whole place was packed with people.  It took about ten minutes to get back to the bus that we rode on, but that’s the end let’s get back to the time when we didn’t need to leave.

When we asked to go anywhere Mr.C would be fine with it but when one of us didn’t want to go to one of the places someone- else wanted to go to we would usually do which one was closer and go there or Mr.C would choose where to go but usually we would do what’s closer but sometimes when I didn’t want to go to somewhere I would think “I really wish I could go to that place!”  And if I freaked out then I probably wouldn’t be able to go on the next field trip.  (But I didn’t get to anyway because I was sick).

We also went to the barn where the animals were like we saw a bunch of bunnies (About 25 Bunnies). (And it reminded me of my bunny because she died because of cancer I think) We saw some horses too,  We saw About 15 goats and we saw some Lammas I think, some Alpacas and no they did not spit at us which thankfully they didn’t but after the animals,

We went to the French Fries place and we ate the Fries in about 10 minutes and when we were finished with the fries,

That’s when we got our faces painted and then like I said I got a Dragon on my face and Wings on my hands and I couldn’t remember what Colby And Bradley got but they didn’t get a dragon and I know that for a fact.  Because if they got what I got then yeah, but I’ve usually gotten stuff that no other volunteer would paint like once I literally got someone to paint a whole dragon on my face but just my face, not my hands or anything.

We started having lunch at the sheepdog place they were getting ready to start while we were eating,  and the dogs weren’t looking at anyone except the dogs that were laying and waiting for the announcer to make them go.

1 hour and a half later one of us asked

“Can we go to the fries place”

“Yeah,  sure I want to go there anyway!”  Mr.C and I replied together. So we packed up all of our stuff and scrambled to the French Fry place,  Luckily the line was about ten people long and it took between 5-10 minutes to get to the counter and wait for the Fries,  Finally the French Fries had been finished and we got them we put ketchup on it and garlic (I think). It’s a good thing that it didn’t take long because we didn’t want to waste time waiting and losing other fun things that we could do but the bad thing is that we didn’t get to go everywhere but we went to a lot of places like the farm.  But let’s get back on track, But speaking of the farm after we went to the farm and when we went to the Fried Dough place when we went to the Fried Dough place the line was about 7 people long and it took like 5 minutes for all the “Magic” to happen when it was done we sat on the grass (But none of the fried dough fell) we got four pieces of fried dough and we each got one piece which it was really good and we all liked the fried dough and we added a lot of good toppings (Well that’s what I call them),  After we went to the fried dough place we went to the store place where there was a bunch of crafts that other people made and were selling for some money like they had Pottery, Slime, Cards and a lot of other stuff.

1 Hour Later We Went to the…

POPCORN!! Place which the popcorn was the BEST we loved it and it was a large popcorn bag and the popcorn was worth $5 but it was worth it and while we were going back to the bus we had eaten I would say about %45 of it because it was the best.

But before we left we went to the cardboard place and we found a piece of cardboard that was Huge and we ripped it violently and shared it with each other.

And don’t even think to ask how many people were there because my guess was about a couple thousand people but who knows.

(Pretend that its the popcorn that we got).  “Mmmmmmmmm, That looks good!” I say as I take some popcorn,

“It does look good”  Bradley and Colby reply to me at the same time,

“It is good its the best popcorn ever”  Mr.C said back.

We all enjoyed our popcorn and we love it as we walked back to the buses. 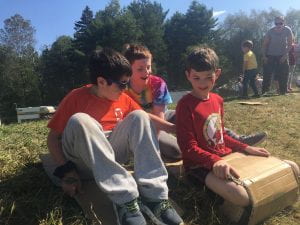